The wrong kind of birdie! Cheeky magpie keeps knocking golfer’s ball off the tee as he tries to take his shot

By Nicole Conner For Mailonline

When a golfer steps up to take a shot, he might be hoping for a birdie, but not the kind that will peck the ball off the tee.

Golfer Charlie Smith, 30, was trying to line up his drive at Bromley Golf Centre, on aptly named Magpie Lane in Kent, but a cheeky magpie had other plans.

Footage shows the bird laying claim to the tee box at the sixth hole, and repeatedly knocking the ball off every time the golfer tries to put it on the peg. 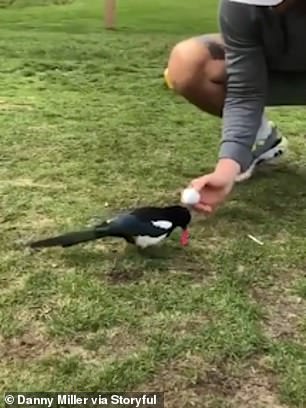 Golfer Charlie Smith tries to line up his drive at Bromley Golf Centre in Kent, but a cheeky magpie keeps knocking the ball off the tee

A bemused Mr Smith warns the magpie to behave, but the bird has no interest in obeying in the video, taken on October 10.

The annoyed golfer shouts: ‘Leave them alone, go away,’ at the magpie, who defiantly knocks the ball to the grass every time.

The bird’s antics are much to the delight of Mr Smith’s friend Danny Miller, 31, who recorded the amusing encounter.

As Mr Smith finally manages to place the ball on the tee he asks the bird: ‘What are you doing? Leave it!’

Once the magpie finally hops away and lets the ball stay where it is, the golfer thanks it before going to take his shot.

But the brazen bird isn’t finished yet and hangs around the golfers, coming back again for one final shot. 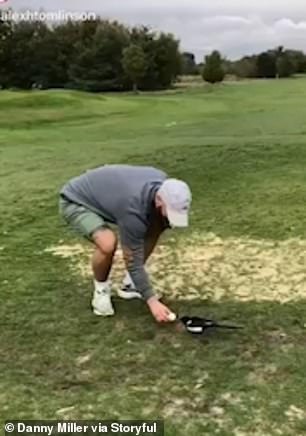 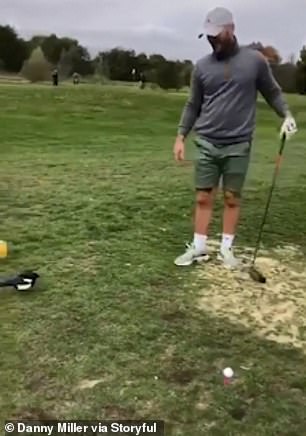 A bemused Mr Smith warns the magpie to behave, but the bird has no interest in obeying and flies back to knock the ball over one more time

Mr Smith laughs and says: ‘Don’t you dare, I swear to God,’ but, wasting no time, the bird flies towards the ball and takes one final peck, knocking it to the ground.

The video has gone viral, and has been liked more than 189.6k times on TikTok.

One user commented: ‘Magpies often push eggs out of nests. This might be what it’s thinking it’s doing! Haha.’

Another joked: ‘I was today years old when I discovered magpies are the cats of the bird world.’

What the Arnold Palmer Invitational Taught Us About Upcoming PGA Tour...

WIN! A golf break for four on Scotland’s Golf Coast