When they tell you the earth moved at Whistling Straits, it’s not a euphemism. Architect Pete Dye loved spending time in bulldozers and it was a good job too.

His first task at this 560-acre plot, off the shores of Lake Michigan, was to bring in 800,000 cubic metres of sand and dirt.

That’s 13,000 truckloads for those of you counting on your fingers and the result you see today must have been inconceivable to all but the most committed believers.

Whistling Straits was once an abandoned airfield. Even nuclear power couldn’t find a home on its cratered outfields.

Then Herb Kohler told Dye he wanted to build Ballybunion on this wasteland. Dye’s expression must have been priceless.

But if you consider TPC Sawgrass – a course carved out of snake-infested swampland – and the doom-merchants who told him he could never get Kiawah Island ready in two years you’ll know Pete loved a challenge.

So this once flat, featureless, track became a clifftop paradise – a dune-laden masterpiece of fescue and sandscapes.

It’s the definition of dramatic, with more than 1,200 bunkers sweeping in between and alongside the now rugged terrain.

The renowned golf architecture writer Ron Whitten wrote that they are “scattered about like laundry in the aftermath of a tornado”. Just ask Dustin Johnson what happens when you get caught up in the storm.

And yet this magnificence is open to all. In a nation where outstanding golf can be hidden behind gates, walled off from everyone but the most connected, Whistling Straits is public.

That’s theoretical, of course. Twilight green fees will set you back around £250 and it’s more like £400 to grab a prime-time spot.

But those who take the opportunity for a once-in-a-lifetime trip, who tread the turf where Vijay Singh, Martin Kaymer and Jason Day have tasted glory, and where Ryder Cup legends will be made, will not regret it.

For this combination of daredevil and difficulty, of inspirational views and creative design, double doglegs and windswept approaches, will have you crowing about your visit for decades.

It’s a masterpiece and, like so many of his courses, a fitting celebration of Dye’s genius. So strap in for three days of glorious match play action at a venue that’s perfectly suited to the task. 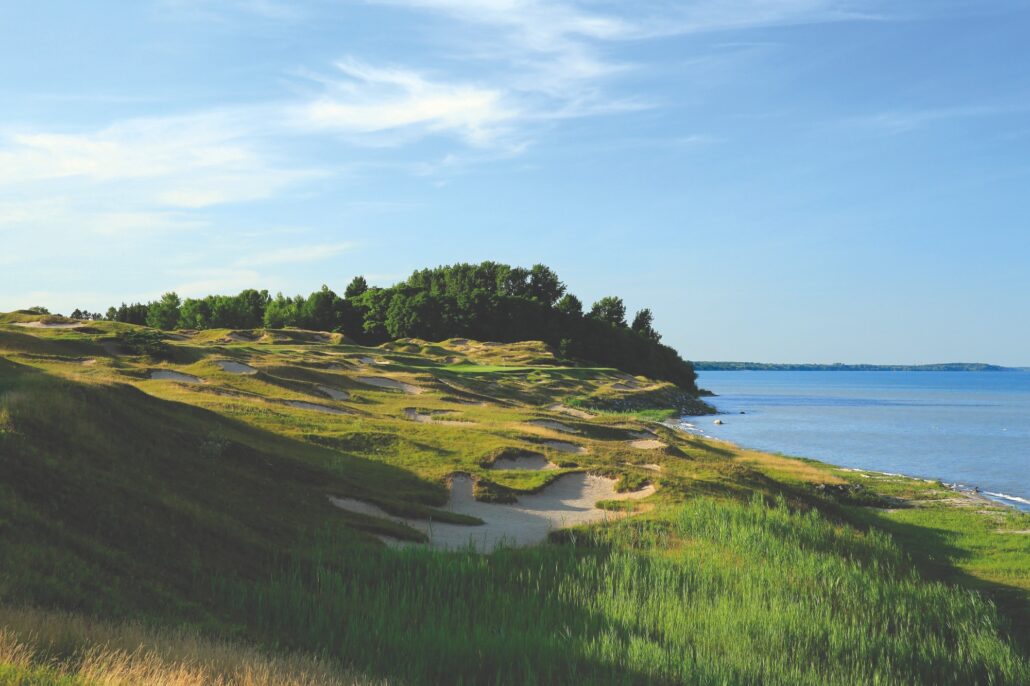 Give up trying to count the bunkers on this long par 4, there are too many to countenance. Add in a blind landing area from the tee that’s going to force the players to trust their judgement – and luck – and you understand why this hole’s name ‘On the Rocks’ could prove very apt for anyone who fails to tame it. Even those who find the fairway will have to go in with a lot of club to a green that’s guarded by traps and a drop off to the lake on the right. 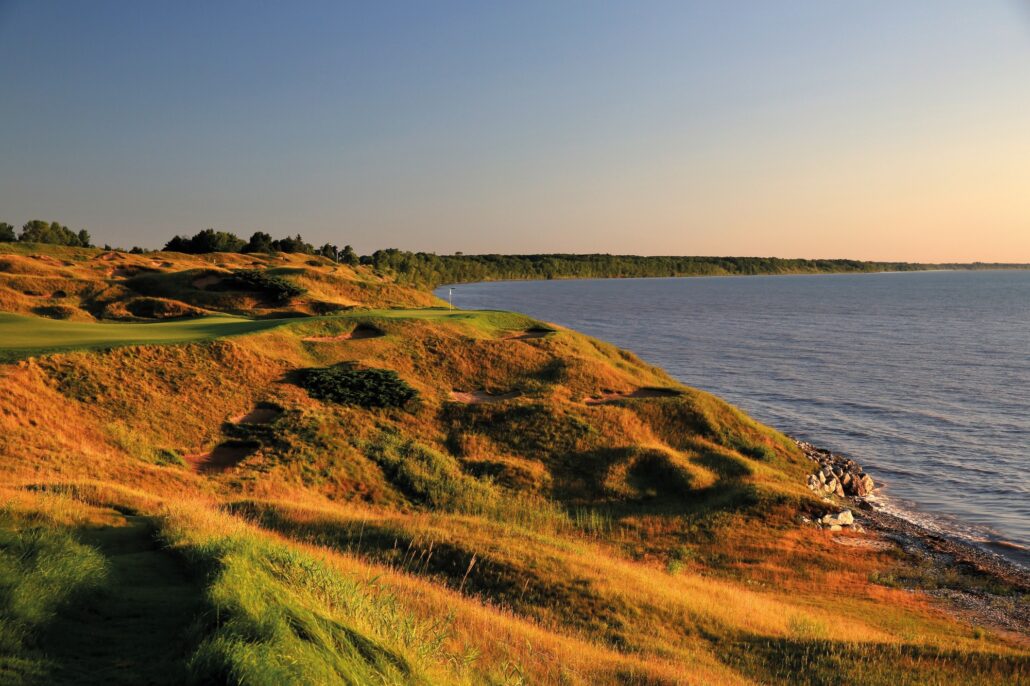 You might be surprised to see ‘Stroke Index 18’ in this list but appearances can be deceptive. Visually it’s stunning with the green carved into the coast and the shores of Lake Michigan all in view from the tee. But menace abounds. The long-angled green is particularly undulating with a fetish for forcing even well-struck shots into deep bunkers. Short is dead, so is long and anything right can kick off 40 feet into a swathe of grassy dunes. Add in the breeze and it’s like playing Russian Roulette. 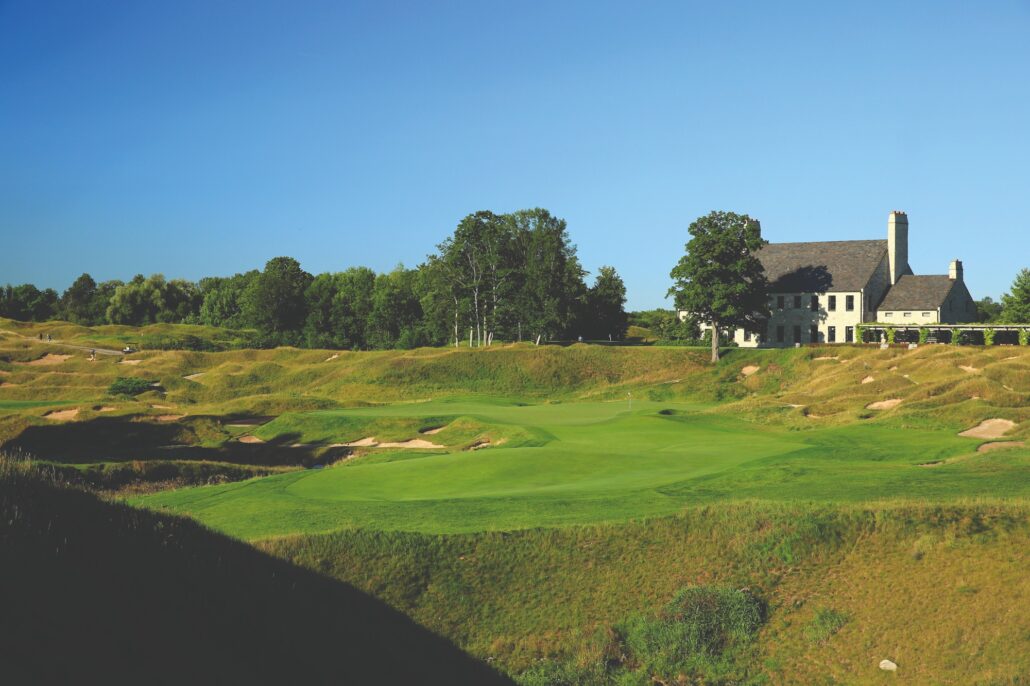 The clue is in the name. Dyeabolical is a nice pun to its creator but finishing positively is going to be a massive challenge for matches that reach this decisive conclusion. What to do? Go for broke off the tee and then try to crash the approach over the sand dunes, or be more conservative and attempt to find the putting surface with a long iron?

Seven Mile Creek, which guards the front of the green, is waiting for anything short or slightly mis-struck. It could prove pivotal in deciding the future of Sam Ryder’s famous little trophy.

10 Things You Know If You Were A Junior Golfer

Best Golf Waterproofs – Garments To Keep You Dry In 2021

The best golf gifts you can buy