How do you stack up against other players, from tour pros to fellow amateurs? We’ve teamed up with the data analysts at Shot Scope to crunch some numbers

The R&A and USGA have been researching hitting distance in golf for years now. They believe that longer driving distances – particularly on tour – are making some golf courses obsolete and the subsequent necessary changes result in the sport being more expensive.

In a surprise move, the governing bodies responded to criticism that the modern game relies too much on power and not enough on skill, by announcing that they plan to rein back equipment at the highest level, while allowing club golfers to continue hit the ball as far as they can.

There is logic to this. Average driving distances for amateurs have barely changed over the last few decades. In fact, most golfers are playing a golf course that is too long for them.

The governing bodies have said they wish to investigate “whether the adoption of these potential Model Local Rules could also allow the elimination of the MOI limit for recreational golfers, which could facilitate greater innovation and provide modest distance increases at this level of the game.”

So what is the benchmark for these modest distance increases?

In fact, scratch golfers average as much as 68 yards longer than a 25-handicapper. Below you can see how far you hit the ball has a direct correlation to your scoring.

It is perhaps surprising that it is only those in the scratch golfer category that averages more than 250 yards off the tee. But do remember this is the overall average with driver and not the maximum length these players can hit the ball. This data also shows a combination of driving distance for male and female golfers. 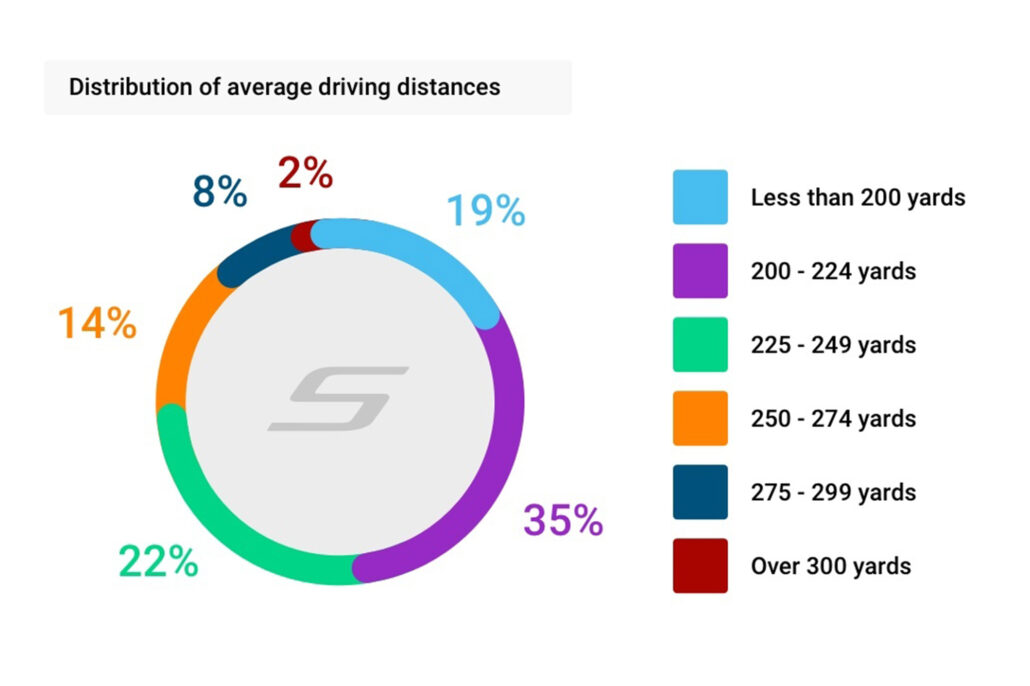 So what can we learn from these numbers?

Well, you can significantly improve your handicap by increasing your swing speed and, with it, your carry distances.

But is there a distance issue in golf? Certainly not among amateur golfers, according to the stats.

Now, how do us club players stack up against the world’s best?

You won’t be surprised, Bryson DeChambeau was the longest driver in the 2021 season, averaging a whopping 323.7 yards off the tee.

That means DeChambeau hits it nearly 100 yards further than an amateur that regularly shoots in the low 80s.

A scratch golfer would, on average, be 37 yards behind a tour pro off the tee. That’s a big advantage you wouldn’t want to give away to such a skilled player…

You’ve probably spent a small fortune to get the set up that’s right for your game, so don’t forget to get specialist insurance from Golf Care to protect your clubs from theft, loss, and accidental damage. Plus, they even cover GPS watches, trolleys, and other golf equipment. With 30% off annual insurance starting from just £26.59, and a free golf gift bundle worth up to £365 including 12 free Srixon balls, it’s a no brainer. CLICK HERE TO SIGN UP.

Phil Mickelson “could have cost himself Ryder Cup…

When will you be able to post scores in other countries?

The Open: R&A confirm number of fans to be allowed