A golf club has been on the receiving end of
‘premeditated vandalism’.

The greenkeeper at Davenport Golf Club in Poynton found that
someone had poured cement into two holes on the golf course and
placed flag poles in the cement, as well as digging up the
greens.

A member of the club said that they’re unsure exactly what time
the incident took place, but it was likely between 4.00pm on
Thursday December 17th and 8.00am on the morning of December
18th.

The member also said an incident took place two years ago, but
nothing this extreme, and that in the worst case scenarios,
relaying greens can cost £25,000.

Cheshire police said they are investigating the incident and
urged anyone with information to contact them.

Speaking to CheshireLive, Tony Stevens, Head Golf Professional
at Davenport Golf Club, said: “We can’t put a timescale on it, but
it was obviously from when nobody was here from four o’clock
yesterday afternoon when it’s dark until the greenkeeper found it
this morning about sort of eight-ish.”

“They’ve tried to cement two flags into the green. The cement
hadn’t quite set properly so we were able to get it out as well as
digging up the 15th green, but it’s difficult to say what
time.”

Tony added that this was not the first time this had
happened.

He said: “It happened two years ago. It seems to happen, but
nothing to this extreme. There was nothing last year, but two years
ago it was bad, but not on the actual green.”

“And every year for about four or five years before that. Now,
nobody has got any idea who it is.

“I know the greenkeeper’s got his suspicions but you can’t prove
anything can you.”

The damage could prove costly for the club, with green relays
potentially costing £25,000. 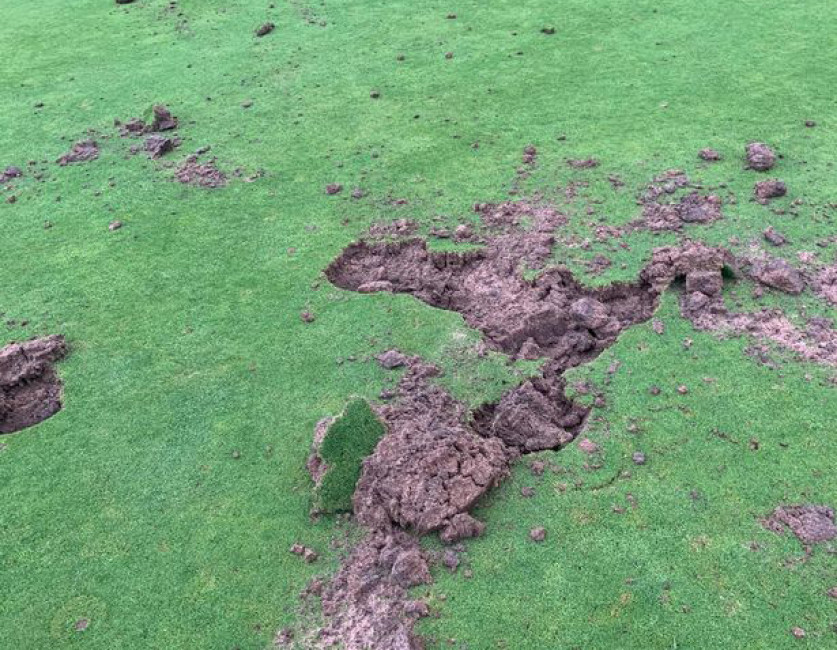 Tony said: “To tell you the truth, it’s quite a bit of damage on
the green. You know, greens cost £25,000 to relay in the worst case
scenario.”

“We’re hoping that can repair it, and hoping it will knit back
together. Who knows? It’s a bad time of year for grass to grow and
knit together.”

Davenport Golf Club posted pictures of the damage on their
Facebook page this morning, along with the message: “Vandalism last
night.

“In conjunction with the police we are keen to know if you saw
anyone around Middlewood Road last night with a spade and
cement?”

“This is premeditated vandalism and has caused a lot of damage
so any help in finding the culprits would be much appreciated.”

A spokesperson for Cheshire police said: “Police are
investigating criminal damage at a golf club in Middlewood Road,
Poynton.”

“Sometime between 4pm on 17 December and 8am the following
morning, damage was caused to a teeing off green and a putting
green by digging holes. They also poured cement into two holes on
the golf course and placed flag poles in the cement.”

“Anyone with information should contact Cheshire Police on 101
or via www.cheshire.police.uk quoting IML876291. Information can be
passed anonymously by contacting Crimestoppers on 0800 555
111.”

What Is Xander Schauffele’s Net Worth?

Best Blade Putters – For Golfers That Like A Classic Shape

‘Covid’s impact has been as big as Tiger Woods’