Danny Willett’s former coach Steve Rolley was diagnosed with prostate cancer after being randomly picked for trial. Now he wants to use his experience to aid others

A random letter through the post triggered a life-altering chain of events for Steve Rolley.

The golf coach, who in his role with England Golf helped Danny Willett as a youngster, was selected randomly for a trial called Barcode1 run by the Royal Marsden, and the shock diagnosis significantly altered his trajectory.

Steve, who is 69, and fit and healthy, was one of 5,000 people chosen to take part in the clinical study in 2020. He spat into a test tube and posted it back for analysis, after which he was summoned for further tests.

That referral, in May 2021, came six or eight months after the initial test, due to the Covid pandemic, and after further tests and a multi parametric scan at Eastbourne, near his home, his MRI results were in – and they were anything but positive.

A score out of five out of five suggested immediate action and after a biopsy, he would eventually be diagnosed with prostate cancer on September 24, three weeks after his 69th birthday.

Two close friends of his had gone through a prostate cancer diagnosis, one had had his prostate removed 20 years ago and another had gone down a different treatment route of brachytherapy, then radiotherapy and hormone treatment.

Steve said: “It wasn’t a fast-growing cancer but it did need treatment. And although I spoke to my friends about it, I’d made up my mind that if it was located in the prostate I would have it out. That’s the way my mind thinks.

“With things like ongoing hormone treatment possibly impacting my physical activity and as a sportsman, albeit an old sportsman who performs reasonably well and looks after himself I just thought get shot of it.”

Mind made up, he had a follow-up meeting with surgeon Declan Cahill, a man whose support and work he championed, back at the Marsden. His surgery was booked up for November 7.

He added: “I know you have to wait six weeks from a biopsy, so it was done as fast as it could be. And although there was a urologist available to discuss alternative treatment I didn’t speak to him as I’d made up my mind.

Steve admitted he had been in “pragmatic mode” when dealing with the diagnosis, and the decisions that followed.

He continued: “It was never, ‘Why me?’ It happens to people. It’s nothing you can control. So I just thought, ‘How can we fix this?’ That’s how my mind dealt with it. ‘Let’s get it fixed as fast as I can.’

“My immediate thoughts were I was so lucky to be on the clinical trial,” he added. “I trust medicine, I’m not scared of it. I knew the Marsden’s reputation. The team I dealt with all along the line at the Marsden were absolutely wonderful. So I had 100 per cent confidence I was making the right decision.

“The lead up to it, the nurses that rang on regular basis were fantastic. I was sent videos to explain, what it was, where it was, what I needed to do in terms of pelvic floor exercises to stop becoming incontinent in the recovery period. The whole thing was laid out absolutely brilliantly, and the follow through before and after surgery wonderful.”

Steve’s surgery was on a Sunday morning, on November 7. He was full of praise of Cahill, who called the day before and checked in on him after the operation, and also called his wife

He continued: “It was like being in Star Wars when I went down for surgery. You see people on telly and expect a few knives and forks on a trolley but then I saw the Di Vinci robotic thing, this huge machine with arms all over the place. And this guy sits in the corner operating it, I woke up two hours later.

“The personal attention I had was magnificent. It was not just the surgeon but the whole support network.”

Steve had a blood test on January 4, and his prostate-specific antigen level was zero. For the next couple of years he’ll have his PSA monitored across three-month cycles, but no further problems are envisaged.

In terms of side effects, Steve cites his fitness levels and healthy lifestyle perhaps contributing to him having no real adverse effects. He said he’s not had too many problems controlling his wee and described himself as “back to as near normal as I can be”.

He added: “The whole thing has not been a pleasant experience, don’t get me wrong, but it’s as good as it could be in the circumstances. I’m obviously relieved and just feel so lucky to have got on the trial too.”

Steve has always had a keen interest in his health and, mindful of his age and risk of the disease, has had regular PSA tests for the last decade. Most recently his prostate had been enlarged but he was told that was regular for his age.

He added: “I could have had it for however many more years and then it spreads outside the prostate which is the nightmare. Then you are in trouble. I know with prostate cancer if you get cancer it’s the best one to get. That’s if it stays in the prostate

“It has changed my life. Some men are frightened to death of going to the doctors and frightened to death of prostate cancer. But I certainly am not one of those. I want it fixing if its broken. If they can find a reliable test it has to be done. If I can do anything to make people aware of this testing programme in some way shape and form, some funding to make sure it carries on, whatever little I can do I will do to ensure that other people don’t have to be lucky like I was lucky.

“The PSA test isn’t reliable enough, and it wasn’t reliable for me as I got cancer and I had a very low PSA reading.

“There is a national programme for breast screening for women, but there’s nothing for men. They are trying to find a programme that can be rolled out and they believe the genetic profiling they have got now may be the thing that they can action, to give an indication you might have prostate cancer or are likely to get it because of your genetic profile.

“So this thing I’ve been part of, I’m hoping in five years’ time or however long it goes on for, people like me will make it into a positive, and it can be rolled it out to everybody. You hope it will be a routine test at a certain age when you get letter through the post, spit into tube, send it off and they will say you are fine.”

In terms of support, Steve remains grateful to his friends affected for their advice, and for lifts back and forth from Worthing to Chelsea during the Covid era where train travel was not recommended.

“My family were shocked. I wouldn’t say I was joyful about it, either. I didn’t want it delayed one day. If it had a chance of breaking out let’s do it today. That’s why I was thrilled how fast it went through. And the professionalism of the people I was dealing with. That gave me a lot of strength.”

Steve is supporting Prostate Cancer UK’s work with the NHS, as the organisation teamed up to find the 14,000 men undiagnosed with prostate cancer since the start of the pandemic.

“At home I just think I’m needed. I always think if I’m incapacitated in some way how is the house going to function. That’s the pragmatic side.

“Prostate cancer is in the papers all the time. You know that you have a one in eight chance of getting it, so why would you run scared and not do anything about it?

“You can do something about it if you get hold of it quickly. The last thing you want to do is kick it in the long grass and then in five years’ time you can’t do anything about it as it’s gone into your bones and your vital organs. Then you have a year to live. Its bonkers, as far as I’m concerned. Take ownership and look after it. There are other people involved in your life – it’s not only you.” 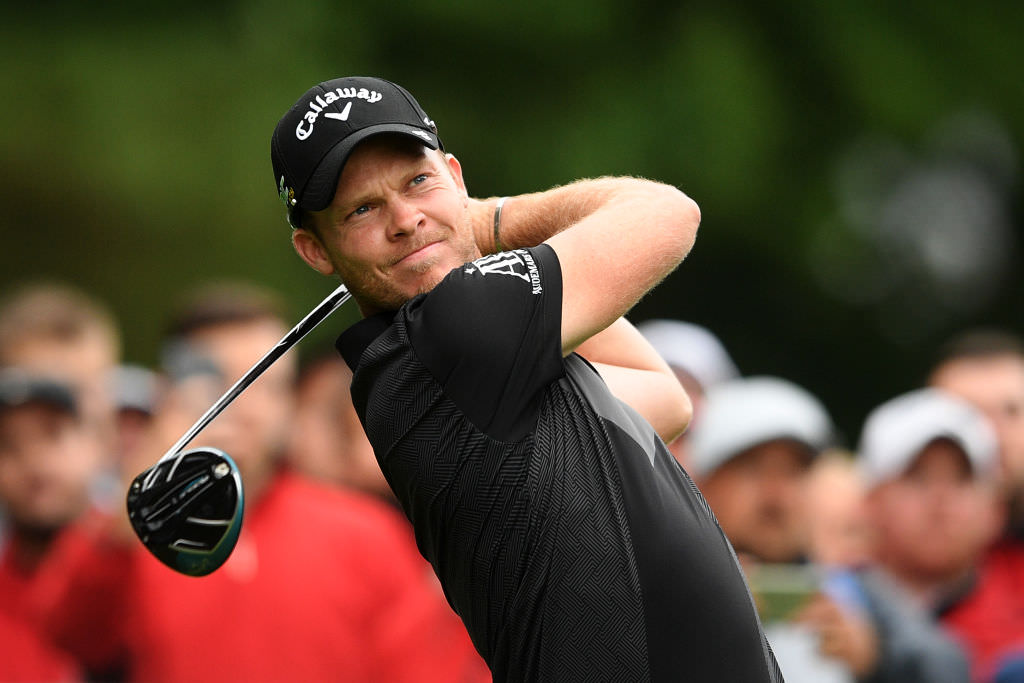 Steve was a tour golfer until the age of 30, and also became a club pro at the age of 23.

He had a dual career as club player and played in tournaments, before stopping playing seriously in competitions around the age of 35 to concentrate on coaching. So he’s been a PGA  pro for almost 50 years and at Worthing Golf Club for more than 30.

Steve got to know the legendary John Jacobs, founder of the European Tour and a man who taught coaches how to coach. He would be his mentor for many years and that relationship would lead to him becoming an England coach and working with several youngsters that would go on to become household names in the sport. Danny Willett, Justin Rose and Tommy Fleetwood were just three names he worked with.

He stood down as head pro from Worthing in 2013, relinquishing his national status at the same time.

“I had a very good run and I taught a lot of good players over a lot of years. That’s why I look after myself. If you are coaching good players, unless you can hit it alright they look down their nose at you! You have to be halfway decent yourself to have any credibility.”

Reflecting on a young Willett, Steve added: “He was always very hard working, very intense and very focussed as a young man. He’s from the Rotherham/Sheffield area and so am I, so we have that in common. We were both members of Rotherham Golf Club.

“He’s remained down to earth and someone you can talk to and have a conversation with. I’d put him in the same mould as Justin Rose. He was exactly the same. They don’t change no matter what success they have. So I’m not surprised he had the Prostate Cancer UK logo on his bag and is doing whatever he can to support the charity

“I think it’s great how things have kind of gone full circle. I helped him a bit and now he’s helping me and men like me with his work for Prostate Cancer UK. So it would be good to thank him for that.

“From a prostate cancer point of view, golf is exactly the right audience to hit. Just look at the average age of memberships.

“I’m really keen to help spread the word about this disease. If I can talk at any golf events – and golfers do listen to golf pros – it would be a really good way to put that message across.”

Prostate Cancer across the UK – facts and figures

– Prostate cancer is the most common cancer in men.

– One in eight men will be diagnosed with prostate cancer in their lifetime.

Visit the Prostate Cancer UK website to check your risk in just a matter of seconds or to get involved in the Big Golf Race.

Have you got to grips with the World Handicap System?

5 big names not playing the US Open

Enjoy a Christmas tune from past Open Championship winners

The best looks we’ve seen from The Belfry!