A region with some excellent golf on offer, we take a look at some of the best golf courses in the Middle East here.

The Best Golf Courses In The Middle East

Golf in the Middle East has exploded in the last 20 years or so with many world class courses being designed by some of the worlds top designers.

The professional game has also taken itself to the region which has resulted in many more great golf courses being built too. Here are some of the best.

Designed by Kyle Phillips, the architect responsible for the majestic layout at Kingsbarns on the Fife coast, Yas Links on Yas Island in Abu Dhabi takes influence from those British and Irish seaside courses.

With rolling fairways, pock-marked with clever bunkering, stunning views of the sea, an ever-present breeze and challenging green complexes, the course captures the rugged essence of links golf and delivers a blend of tradition and modernity.

The course offers something a little different from most tracks in the Gulf and with teeing options from 7,450 yards right down to 5,800, it’s a course that all can enjoy. 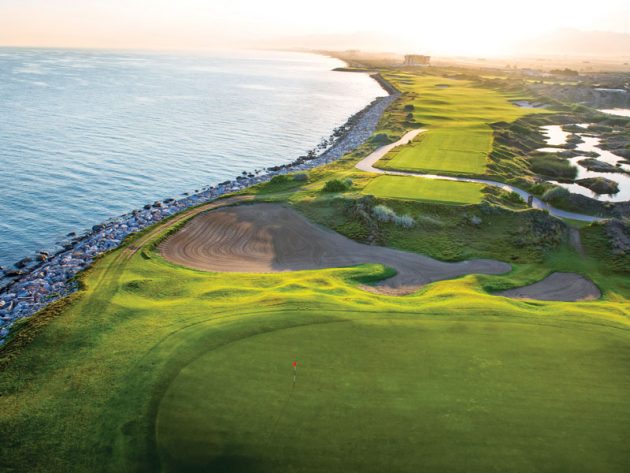 Greg Norman’s layout, home of the European Tour’s Oman Open, lies at the heart of a luxury leisure and residential complex, with the course beautifully positioned along a stunning stretch of coastline.

Steep humps and mounds line the fairways over the first few holes, but it’s the bunkering that represents the biggest challenge throughout. It has proved a huge success as host of the Oman Open with several tour players peaking of the course favourably. “Al Mouj is a must-play if you’re ever in Oman,” says Eddie Pepperell. “I’d say it’s the best course I’ve played in the Middle East.” 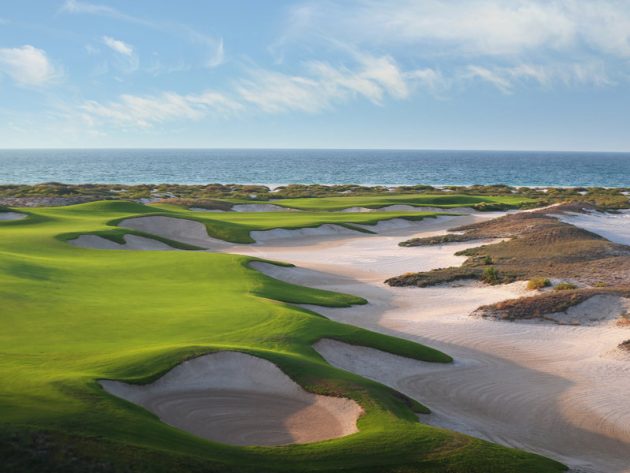 Situated on raised dunes just outside Abu Dhabi, Saadiyat Beach was designed by Gary Player and it is a serious championship test which means you need to choose your tees accordingly. Having said that, it is a sumptuous feast of golf all the way. Several of the holes would serve as the signature design at most other courses, and the finishing few are simply terrific. 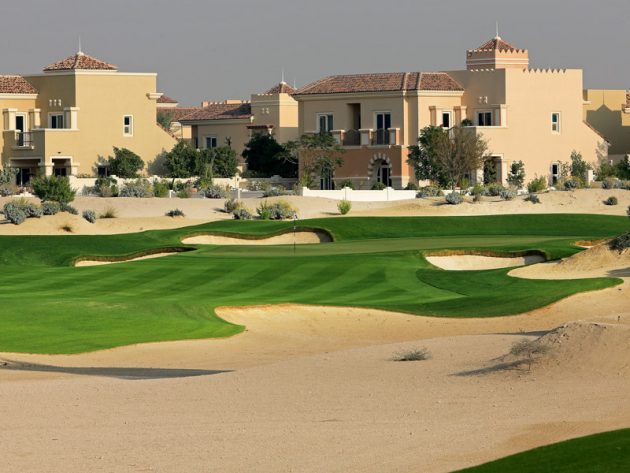 With generous landing areas off the tee, fresh prevailing winds and undulating greens, The Els Club is one of Dubai’s top golfing venues. Set amongst the Victory Heights residential development, the course is set in a sporting oasis just 20 minutes from the city centre.

Ernie took his inspiration from his world wide golfing experience. 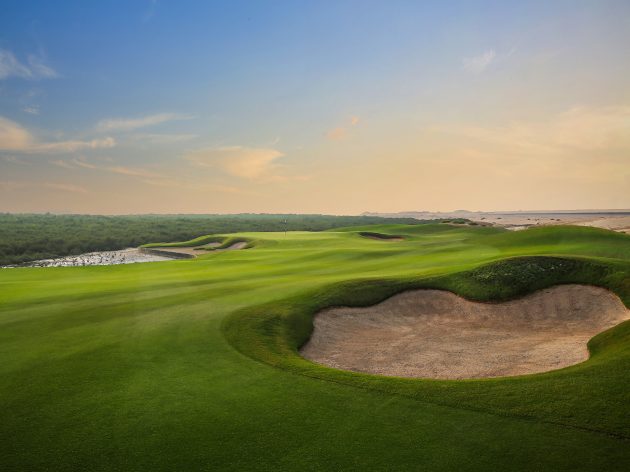 Just along the coast about 45 minutes from the Dubai International Airport is the Al Zorah golf complex. The golf course has been designed by Nicklaus Design to flow around two large lakes, with wide fairways a feature of the layout. 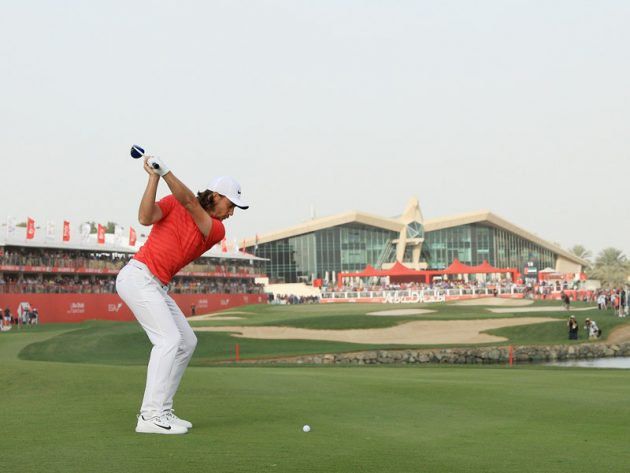 The luxurious Abu Dhabi golf resort has made a name for itself as one of the most stunning and well maintained golf resorts in the Middle East. Its championship course, the par 72 National Course, is a natural inspiration with lush fairways, strategically placed bunkers and generous greens to challenge golfers whatever their handicap. 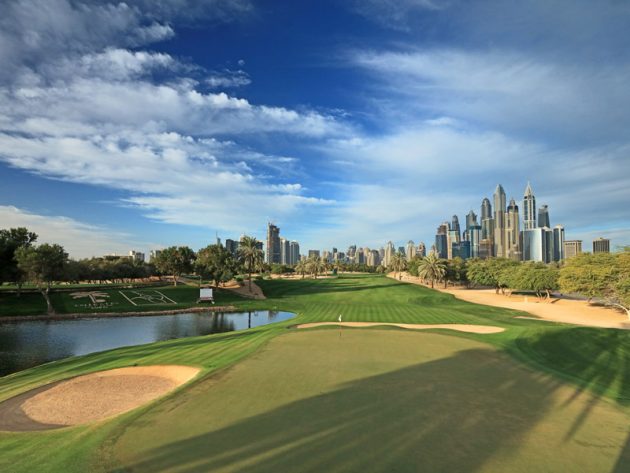 Emirates GC has the first all-grass championship course in the Middle East when it opened in 1988. It first hosted the Dubai Desert Classic the following year.

The course is laid out among the sand dunes a dozen miles away from the city centre. Lakes adorn the design and provide some tight challenges at times, such as on the 7th, a par-3 over water, and the 18th, where the approach to the long green is over another lake. 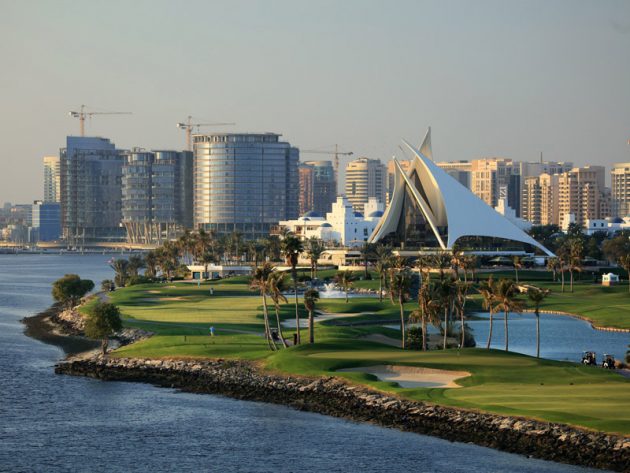 The two years that the Dubai Desert Classic went away from the Emirates Majlis course was in 1999 and 2000, when Dubai Creek staged it instead.

The course is much praised, not least for its two closing par 4s on 17 and 18, which hug the creek on the left, with palm trees and bunkers to the right of the fairway. 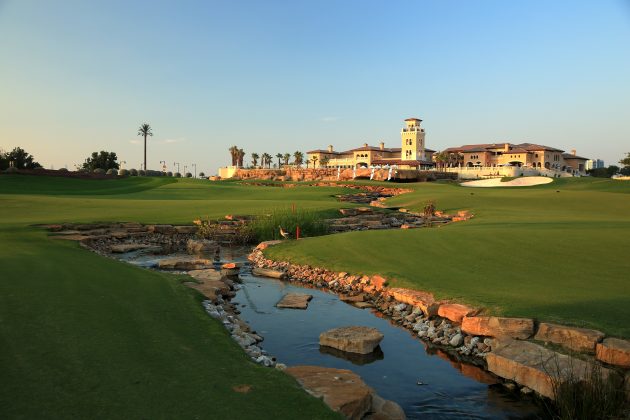 The Earth course was built specifically for the European Tour finale and has some generously wide fairways leading to some large flamboyantly sloping greens. The course designer, Greg Norman, is proudest of the closing four holes, which he calls ‘the most challenging mile in golf’. 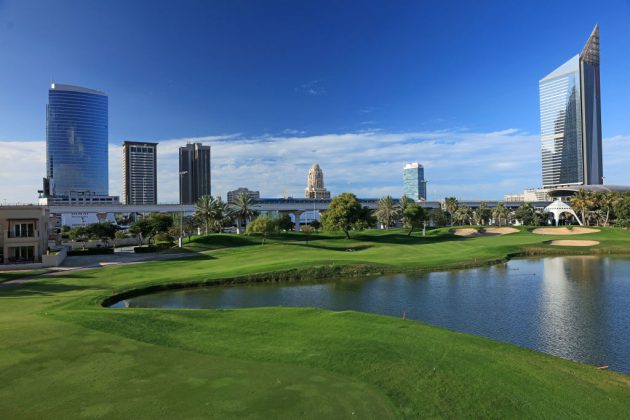 The second course at the Emirates is now called the Faldo after a redesign by the six-time Major winner.

The original course name was Wadi after the valley that runs the length of the course. other noticeable features of the course are 14 lakes and dramatic bunkering. 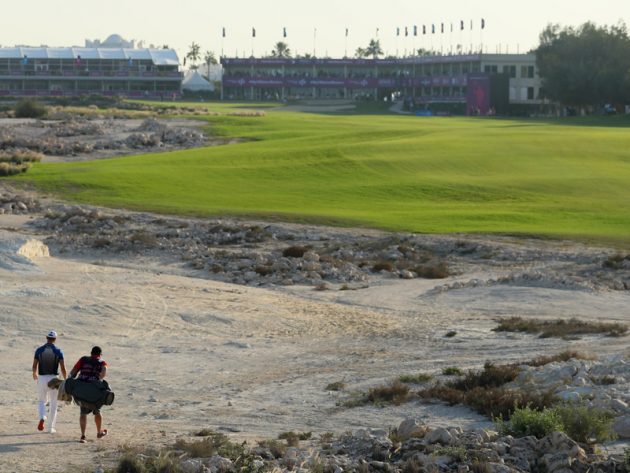 It opened in 1997 and constructed by Peter Harradine. It’s a testing layout, particularly when the wind blows. There are eight lakes to negotiate as well as numerous outcrops of limestone rock. The course features 65 giant cacti that were imported from Arizona while more than 10,000 trees and bushes were planted along the fairways to add definition and to act as additional hazards. 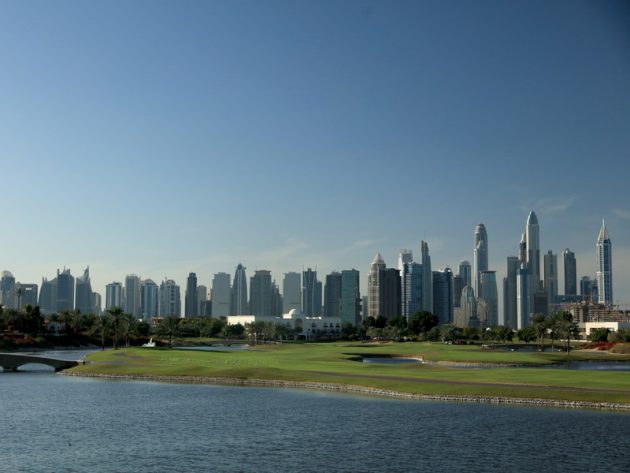 Address Montgomerie sits right next door to the Emirates Club and yet is remarkably different in style.

The long 18th is quite probably the most thrilling or intimidating closing hole in the country. Water eats in on either side of the fairway, and as if that isn’t enough, there is a large pond sitting right in front of the green, which even then has bunkers for protection. Dubai’s stunning architecture provides a fabulous backdrop, and in a way this hole encapsulates something of everything that is golf in the UAE.

Three holes-in-one on No. 8 within 90 minutes at Northampton Country Club

Income is rising fast at most UK golf clubs

Rory McIlroy’s gear through the years: How his setup changed

Portugal holiday prices as low as £155 for seven nights amid...

Woods Vs Mickelson Second Match Confirmed For Next Month

Northeast Amateur cancelled for the first time in its history

PGA Tour: Did you enjoy watching golf’s return without crowds? |...

The Best Golf Courses In France

The Best Golf Courses In Mauritius