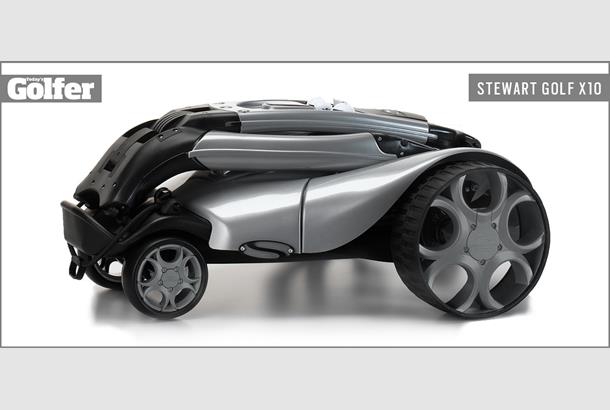 Stewart Golf give X Series an ‘under the skin’ upgrade to create X10 Remote and X10 Follow electric golf trolleys.

Stewart originally launched the iconically-shaped trolley to critical acclaim as the X1 Remote in 2003 and have constantly evolved the product, with X3, X5 and X7 models before the groundbreaking X9 Follow was released in 2014.

Now the X10 sees significant upgrades with Remote and Follow models. Both benefit from the same EcoDrive motor technology that was launched with the Q Follow, meaning they are up to 40% more efficient than the outgoing version. This means that the X10 battery will give users 40 per cent more golf than previous versions for each charge. “As a company lead by engineers, it’s in our DNA to constantly develop and improve our machines,” David Funnell, Stewarty Golf Managing Director, said. “The X Series has been a fixture of our product range since day one and it remains integral to the business.”

In addition the X10 benefits from the latest electronics system that is now manufactured in Great Britain after being ‘re-shored’ from Europe last year. The X10 Follow features the latest seventh generation of Stewart Golf’s proprietary Follow system, featuring dedicated electronic calibration which results in the most accurate and reliable Follow experience to date.

A new electronics assembly area at the Stewart factory ensures each handset is optimised and matched to the trolley’s main electronics system using a bespoke autotuning system.

“Even after a very successful launch of the Q Follow, sales of the X Series have remained very high,” Mark Stewart, Stewart Golf CEO, told TG. “In the refreshed X Series and new Q Series electric models, and the R Series Push, Stewart Golf has a strong product line up for 2021 and beyond.”

Stewart Golf is in the process of expanding their capacity in anticipation of further growth, after almost doubling turnover in 2020. As well as almost doubling the number of staff at the company, they are also adding a futher 3,500sqft of floor space. This will allow the creation of dedicated Q, X and R Series production lines as well as a second electronics assembly area to keep up with increased demand.

Has the World Handicap System Worked?

COVID-19: Is golf allowed in Tier 4 in England?

Best Blade Putters – For Golfers That Like A Classic Shape

Golf flagsticks: Why does something I’ve been doing my whole life...