Charl Schwartzel will take a three-shot lead into the final round of the LIV Golf Invitational London event at Centurion Club, where 48 players are competing for a prize fund of $20m and a first prize of $4m.

If the 40-year-old South African can keep his head in front, he will win almost a quarter of his entire career earnings for just three days work. His bank balance will be boosted by a further $750,000 if his team, the Stingers, which also features second-placed Hennie du Plessis, Louis Oosthuizen and Branden Grace, can hold on to the seven-shot lead that they currently enjoy in the team event, for which there is a first prize of $3m.

“I’ve been around this game a long time,” Schwartzel said after adding a second round 66 to his opening 65. “There’s a lot of things that can happen.”

After Du Plessis, who missed a short birdie putt at 18 en route to a second round 68 to finish on six under, the next two closest pursuers are Peter Uihlein, who matched Schwartzel’s 66 to move to 4 under, and Oliver Bekker, who shot a 67 and is now at 3 under.

Uihlein knows it will be difficult to catch Schwartzel in the individual competition and Stinger in the team competition, but with the top three scores counting for each team in the final round, hot rounds by multiple players could produce a huge move.

“There’s three scores, so anything can happen,” Uihlein said. “It’ll still be tough to mount a comeback, but it’ll be fun. We have no idea what will happen tomorrow because it’s the first time we’re doing it, so it should be cool.”

Scott Vincent, winner of last week’s Asian Tour event at Slaley Hall, which qualified him for this tournament, is tied fifth on one under, a total matched by Dustin Johnson, and both players will need to go very low if they are to mount a charge on the top prize.

Phil Mickelson followed up his opening  69 with a 5-over 75, in which all elements of his game deserted him at times. It was the highest score among the four members of Hy Flyers GC, the team he captains. Ian Poulter bounced back from his opening 75 to shoot a 4-under 66, tying for the lowest round of the day. He made the biggest move up the leaderboard, moving from T-38 after the first round to T-12.

The final round gets under way at 2.15pm tomorrow. As before, it will involve a shotgun start, although the three players with the lowest scores will be teeing off at the first hole, so they will finish in front of the grandstands at the 18th. 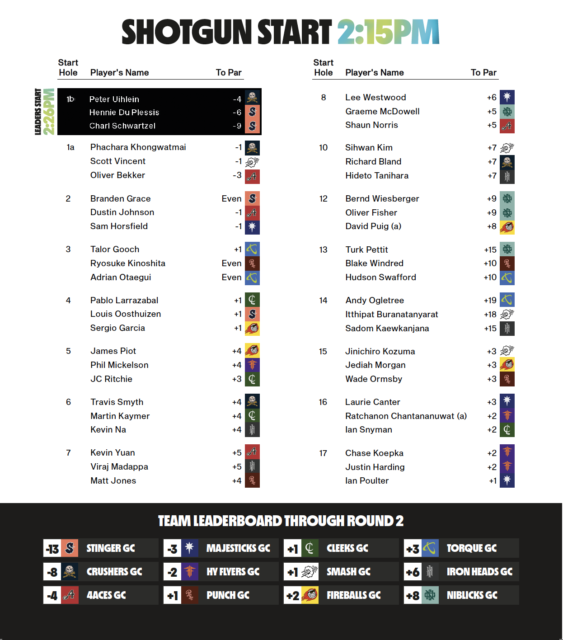 Shock as tour chiefs recuse themselves from LIV OWGR vote

Hatton into the top 10

Beat the chill with the best winter golf hats