Hop to it and get out of the way! Golfer tees off on kangaroos for blocking the fairway at a picturesque Australian golf course

A golfer angrily shooed away a mob of kangaroos that rudely interrupted his game by lazing around on the fairway he was about to hit into.

He was trying to unwind over the weekend on the picturesque course of Woolgoolga RSL Golf Club in Perth, but sleeping marsupials got in the way.

The man can be seen marching towards the kangaroos before waving his club and arms to shoo them away.

‘Come on, out of the way,’ he yelled at the kangaroos while his mate chuckled at the situation.

One of the kangaroos simply scratched its behind, unfazed by the man’s efforts.

The golfer managed to drive away three of the animals but still had about 20 more to go.

Viewers on social media were just glad the man wasn’t attacked by the kangaroos, which are known to strike back.

‘All fun and games until they turn around and kick the s**t out of you. Search Kangaroo attacks on golf courses. They can, and do f**k people up,’ one person commented on social media.

‘They can turn nasty… God help anyone that gets the nasty ones,’ a second agreed.

Kangaroos are known by Perth locals to frequent golf courses.

They often thrive due to the ideal living conditions of no predators, an unlimited water source, and ample shade.

The marsupials are usually relocated to safer environments if they become aggressive towards people. 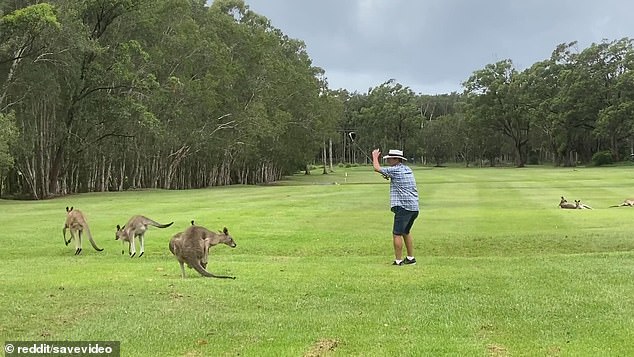 The kangaroos were unfazed by the man’s efforts, with one scratching its behind (pictured left) as the man continued to wave his club at them (pictured)

What Is The Aramco Team Series?

Calls to delay sale of golf course land in order to...