After a record-breaking final day at the 1995 PGA Championship, Colin Montgomerie was a whisker away from lifting the Wanamaker Trophy. But, as George Cooper found out, he has no regrets

Colin Montgomerie will be forever be a top-three answer to that age old question: Who is the best player to never win a major?

But to trivialise Montgomerie’s lack of achievements on the grandest stage is a disservice to what he did elsewhere in the game.

The Scot, now 58, topped the European Tour’s Order of Merit eight times – including a record breaking seven in a row from 1993. Only Seve Ballesteros and Bernhard Langer have won more European Tour titles than Montgomerie. He played on seven Ryder Cup teams, winning five, and was the victorious captain at Celtic Manor in 2010. “That was my major,” he smiles.

While Montgomerie has more than made amends on the senior circuit, his failure to land one of the big four in his European and PGA Tour days are well documented. None more so than the 2006 US Open when he carded a double-bogey from the middle of the 18th fairway when in a share of the lead.

But for all the talk of Winged Foot and that meltdown, it was the 1995 PGA Championship where Montgomerie feels he should have come away with some silverware.

Having birdied the final three holes at Riviera to break the record for a low score in a major championship and match Steve Elkington’s target of 17-under-par, Montgomerie went on to lose in the first sudden-death play-off hole, with his Australian rival sinking a 35-foot putt to take the Wanamaker back down under.

“That was the best golf I ever played in a major,” Montgomerie tells NCG. “Sixty-seven greens in regulation out of 72. That doesn’t happen in a major championship. Not around Riviera.

“It was a sort of golf that was played on paper. The way you dream to play golf.”

Montgomerie had entered the final round five shots adrift of leader Ernie Els, who would eventually finish two back, but he came alive down the stretch to force extra holes.

“I hit my drive, believe it or not, about three inches from the divot I just made 10 minutes ago. I was almost in it! That was how bizarre it was.”

From there, each player found the target and it became a putting contest between two players desperate to land their maiden major title.

“I’d hit mine into really very close to where I was in regulation play, about 20-foot short left of the hole, and I’m thinking, ‘OK, I’ve got a chance of holing and he could still make five from where he is’.”

Elkington, though, found the bottom of the cup and for the second straight year Montgomerie was seen off a major play-off, having been dealt the same blow by Els a few months before at the US Open.

Despite playing the near perfect game tee to green, Montgomerie knew where he had gone wrong.

“Unfortunately, I had 17 more putts than Elkington. That’s over four a round I’m giving away to the eventual winner. That’s a lot. A hell of a lot.

“They had re-done the greens, and they were the poorest greens that we’ve ever putted on in a major championship. I just didn’t get to grips with them at all.”

Still, Montgomerie describes the 1995 PGA Championship as “not the one that got away”.

He adds: “Elkington birdied the last hole. OK, fine, congratulations to him. But that was the best golf that I had played for four days in a row. To hit 17 greens a day around Riviera was really impressive. Never mind in a major. It just didn’t happen.

“He had a little more fortune than I did on that day. And that was that.”

After turning 50, Montgomerie didn’t need long to earn his first PGA Tour Champions major, winning the Senior PGA Championship in 2014 and 2015, either side of a Senior US Open triumph.

“To win the first one was fantastic, and then to go back in 2015 and win again – that was special.

“It meant a lot because it was the PGA Championship and it’s a real major. Although it was a senior major, it had the feeling of a major championship. The PGA of America set it up very, very well. It was a major field, the crowds were fantastic in Michigan, and it was it was a thrill to win.” 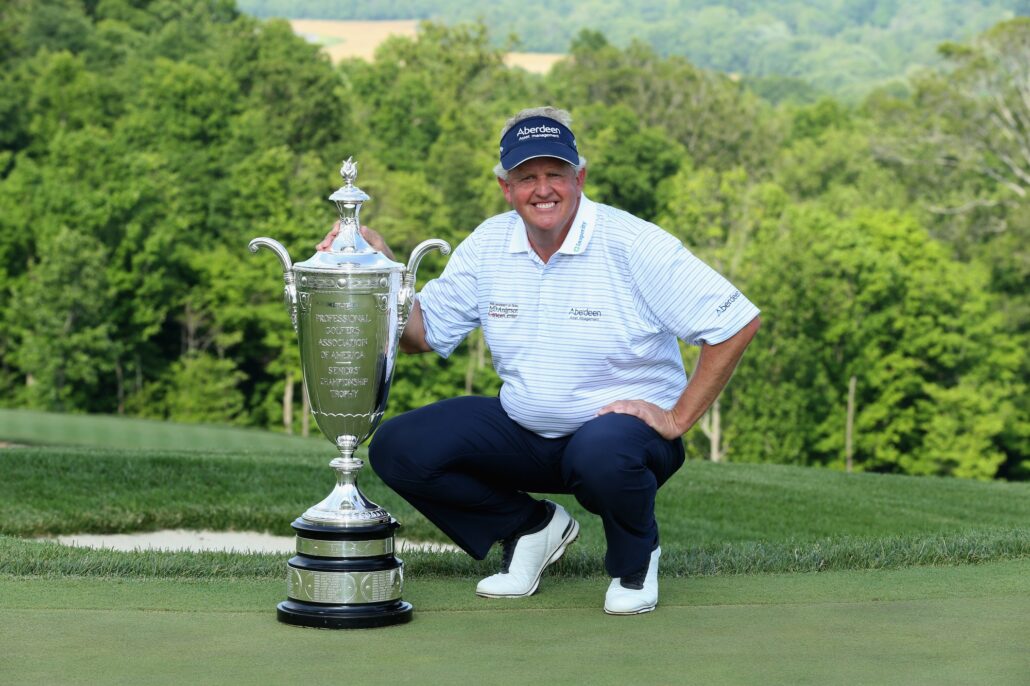 Want to get started in golf? Start with these package golf...

What is Ready Golf and when can you use it?