The Stage Golfing Society, founded almost 120 years ago, has brought together many of our favourite actors, comedians and stars of film and television in a shared love of the game. April Tod charts the history of one of the UK’s oldest golf societies and finds out about the exploits of its famous players and the stories behind its most coveted trophies

While football seems like an appropriate sport for actors to play in their spare time, given the level of amateur dramatics and feigning of injuries that takes place in the most matches these days, it is the Royal & Ancient game of golf that seems to have proved the most attractive leisure pursuit for ‘artistes’ down the years.
From Bob Hope and Bing Crosby to Ronnie Corbett, Bill Murray and Ant & Dec, there is something about swinging a club and walking the fairways that has proved an irresistible attraction for generations of actors, comedians, film stars and all-round entertainers. Whether it’s the show-off nature of holing a long putt or smashing a booming drive, or the bonhomie and conviviality of the post-match clubhouse, most recently Oscar, BAFTA or TV Choice awards ceremonies could probably pull together a decent scratch golf team at short notice if the circumstances required.

While many British actors happily ploughed their own lone golfing furrow for years, it wasn’t until 1903 that the popularity of the game among the domestic thespian community grew to the extent that a society was formed to provide an opportunity for those that ‘trod the boards’ for a living to share each other’s company – and the fairways – in a more formal setting.

The Stage Golfing Society as it was known, and still is to this day, was founded 119 years ago as a means of offering many impoverished actors a less expensive way to play golf and to exploit the cheaper green fees that were offered to societies. While its 400-strong membership is slightly more well-healed than it was over a century ago, having expanded its selection criteria to those working in all facets of the entertainment industry, including TV, film and radio, back in the early days it was only those who worked on stage – which at that time was virtually the only source of public entertainment – that were able to apply for membership.
Letters were sent out to 213 prospective members inviting them to join the new golf society, with a view to attracting a maximum of 100 founding members, all of whom were required to pay a guinea for the privilege. All but one replied, although not all in the affirmative, with the only non-respondent being the comedy actor Fred Leslie, who, somewhat ironically, went on to become one of the society’s best known and most successful golfers. In a subsequent letter, new members were instructed to ‘play like gentlemen, not actors,’ a requirement that remains to this day, although the gender-stereotypical language has since been updated.

In those early years, Bushey Hall Golf Club in Hertfordshire – which sadly closed in 2019 – was the only club affiliated to the society, and it wasn’t until after the First World War that ties with more clubs were established, with the likes of Ashford Manor, Beaconsfield, Foxhills, Moor Park, Richmond and Sandy Lodge being among the early supporters.

And it wasn’t until over a quarter of a century from its founding that the SGS held the first of its now legendary annual dinners, with members gathering at The Savoy Hotel in London in 1929 to toast that year’s winners. The dinner was attended by several high-profile guests, including the Prince of Wales, the Earl of Birkenhead, Lord Brabazon and Sir Anthony Eden. An impressive fourball if ever there was one.

During the Inter-War Years the society was headquartered, somewhat salubriously, in The Salisbury, a Soho pub that was popular with actors of the time, and it wasn’t until 1948 that a more suitable setting was found to conduct business when The Richmond Golf Club in Surrey invited the Society to make the club its permanent home, where it remains today. 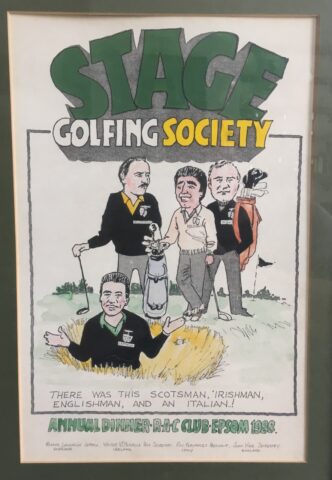 The SGS has been given its own room inside the historic clubhouse, The Stage Room, whose high walls are covered with heavy wooden honours boards bearing the names of past winners of the society’s many competitions, along with hand-drawn cartoons depicting the antics of some of the society’s most famous members. Glass cabinets full of historic silver trophies – over 50 at the last count, many of which have been competed for a century or more – are also on show.
Cast your eye down the list of past competition winners, past presidents and captains, you come across a veritable Who’s Who of actors, entertainers, TV stars and musicians, with the likes of Eric Sykes, Ronnie Corbett, Albert Finney, Christopher Lee, Michael Refern, Jason Connery, Garfield Morgan, Tom Courtenay, James Bolam, Des Lynam, Philip Glenister and Dougray Scott all with their names in gold paint. The late Sir Peter Alliss, the doyenne of golf commentators and a thousand after-dinner speeches, pops up as president in 1990, while former Yes keyboard player Rick Wakeman performed the same duties in 2005.
Although social golf is popular among the membership, it is the competitions that attract the most interest, with the SCG competing for 52 trophies over 48 annual competitions, with 21 matches scheduled every year. The oldest is
the Bennett Edwardes Trophy, which was established in 1904 and is presented to the winner of the summer knockout competition, the final of which is played over 36 holes at Richmond.
The Gold Cup, which was first presented in 1922, is widely regarded as the most elegant of the trophies competed for and is played for in a Medal competition at Richmond in June; while the Tudor Owen Golfer of the Year Trophy, is a replica of the famous Claret Jug, with the winner having accrued the most points for top-five finishes in a number of competitions held throughout the year. Recent winners include musical theatre actor Scott Mobley (2017), actor/director Stephen Rayne (2018), while Dougray Scott took the honour in 2003. A mission possible.

A name that crops up more than any other, though, is that of Sion Tudor Owen, a Welsh actor and producer, now aged 63, who won the society’s Scratch Prize a total of 16 times in the 20-year period between 1987 and 2007. Dig a little deeper and you find that Sion played county golf for Surrey in his youth, and clearly held onto his skills during the intervening years of playing minor roles in Emmerdale, Midsomer Murders, The Bill and Casualty.
Open to men and women who have been creatively involved in the entertainment Industry for at least two years and are able play golf ‘to a reasonable standard’, the Stage Golfing Society continues to thrive today, with 80-100 active golf members among a total membership of 400.
The society broke new ground in 2017 when journalist and broadcaster Philippa Kennedy became its first woman to captain. One of her duties as captain, as it is for all SGS captains, is to produce the annual stage show in October for members of Richmond Golf Club.

“Every captain has to do this and it’s always a worry, but there are plenty of people to help and it always goes down well,” says Kennedy, who was also captain of the Press Golfing Society 20 years ago. “Golf has given me so much and it’s a great privilege to have captained two of the oldest golf societies in England. We now play an annual match against each other and it’s great to see how well these two groups of people get on. Actors always need an audience and media people are great listeners.”
Although Covid put paid to members competing for trophies for the past two seasons, the society’s schedule of events will be back with a bang in 2022. As every decent actor knows, the show must go on.

Where To Play And Where To Stay