Claret Jug, golf’s most famous trophy, is currently touring the UK and Ireland as the countdown to The 150th Open, taking place at St Andrews from July 12-15, continues.

The 150th Open Claret Jug Tour, in partnership with HSBC UK, will visit schools, golf clubs, city centres and HSBC UK branches from Wednesday 15 June through to the Championship in mid-July. 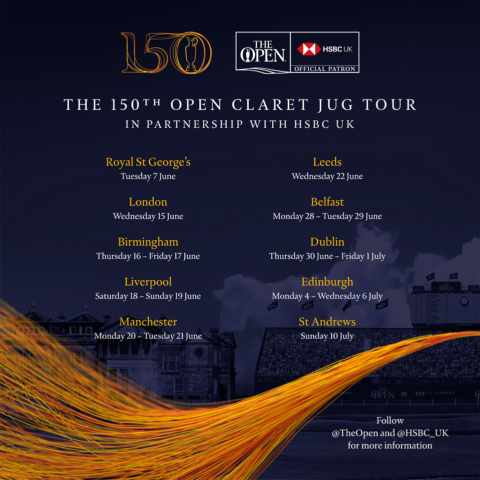 Dating back to 1872, the Claret Jug is presented to the Champion Golfer of the Year at The Open. Originally produced by renowned silversmiths, Mackay Cunningham & Company of Edinburgh, the trophy has been on permanent display at the clubhouse of the Royal and Ancient Golf Club of St Andrews since 1928.

Having started from Royal St George’s Golf Club in Kent, host of The 149th Open, on June 7,  the tour will now visit eight cities across the UK & Ireland, including Belfast, Dublin, Manchester, London, Leeds, Liverpool, Edinburgh and Birmingham before reaching St Andrews on Sunday 10 July.

Golf fans will be able to get their picture taken with the Claret Jug at a selection of venues including golf clubs, HSBC branches and public landmarks.

The Tour will also seek to inspire the next generation of golfing champions by visiting schools and community groups along the tour route, as part of HSBC Golf Roots, the umbrella development programme of The Golf Foundation that HSBC has supported since 2011.

To find out where you can see the Claret Jug on Tour, visit TheOpen.com, and follow @TheOpen and @HSBC_UK on socials.

Celebrating the most influential women in golf history

The BIOM C4 is ECCO’s most advanced shoe ever