The 12 time winner on the PGA Tour said ‘I have been pushing Richard for a pink watch for ten years and here it is!’ said Bubba Watson on seeing the RM 38-02 Tourbillon for the first time.

Inspired by the audacity of the previous calibres signed Bubba Watson and by his ‘lucky’ colour, the RM 38-02 is built around a baseplate in Carbon TPT, which comprises many layers of parallel carbon filaments. This material, omnipresent in the RM 38-02, is very demanding in terms of machining, both because of its hardness and because of the skeletonisation it is subjected to. As for the entire watch, many extensive tests were carried out on the baseplate to ensure that its skeletonisation in no way affected its mechanical properties.

The baseplate supports grade 5 titanium bridges giving the movement powerful dynamics. They firmly maintain the involute gear wheels and the tourbillon fitted with a variable-inertia balance wheel. The open-work bridge incorporates two tubes that pass through the movement on either side. In grade 5 titanium and hand painted in the coveted pink colour, they further accentuate the general lines of the calibre. 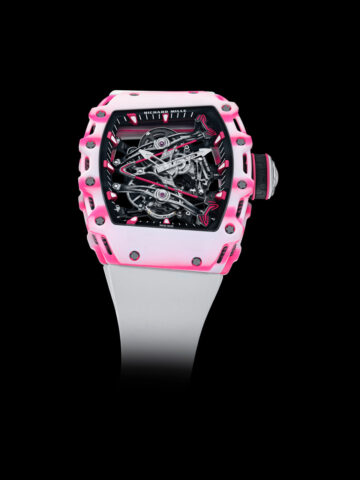 The colour is a nod to 43 year old, Bubba’s iconic Ping driver, and brings subtle touches of pink inside the movement. This colour is also present on the back of the calibre on a monumental micro-perforated bridge, echoing the pattern on the of Bubba’s driver when competing. The assembly of these PVD-treated bridges does not allow the watchmaker even the slightest of error. A clumsy gesture, the merest scratch on a part, and the component is simply binned. The ‘nec plus ultra’ tailored for ultra-performance.

Evolutions, both physical and technological, have greatly changed the face of golf over the ages. New training techniques mean these sportsmen are striking the ball ever further. The arrival of new construction processes, like the discovery of new materials, have enabled the manufacturing of golf clubs at the cutting edge of the latest technology. Considering that a golf ball today undergoes an acceleration of up to 50,000 g’s, it was critical to ensure that the RM 38-02 could withstand shocks of no less than 10,000 g’s. These volumes are staggering at the scale of a calibre of only 9.19 mm thick. The engineers paid particular attention to its size, delivering both a strong architectural dimension, which expresses its complexity and the compactness necessary for its shock resistance.

Pink it is. There is no question about that but that the new RM 38-02 Tourbillon Bubba Watson fits the brief. Inside and out, the watch and even the case are made of a unique pink Quartz TPT®, white Quartz TPT and Carbon TPT, to match Bubba’s unique personality. The association of different colours and materials without merging them was a real technical challenge.

However, this model embodies a wish close to Bubba’s heart from the first day of the partnership. A wish now fulfilled by this asymmetrical case, tapering between 2 and 5 o’clock and cancelling out any friction with the torque-limiting crown on the wrist. The open-work bezel provides visual power and accentuates the sportiness of this timepiece, while the Carbon TPT and pink Quartz TPT caseband provides that fantastic contrast of genres that ultimately defines the identity of this colourful timepiece.

The RM 38-02 Tourbillon Bubba Watson is the fourth watch of the collection bearing Bubba’s name over the sportsman’s 10 years with the Richard Mille family.

The time has a limited edition of 50 pieces.

WATCH: Rory McIlroy has tantrum at US Open – and…

The KBS PGI shaft bridges the gap between graphite…